* Available as an add-on

In an outbound job data flow, ChartHop serves as the primary source of truth for open jobs. Depending on the status of a job in ChartHop, it translates to a specific status for the same job in Greenhouse.

Only one Hiring Manager and Recruiter can be chosen in ChartHop and thus be synced into Greenhouse.

As a workaround, if Hiring Manager and/or Recruiter is blank in ChartHop, but multiple exist in Greenhouse, syncs do not overwrite what’s in Greenhouse.

Greenhouse job field values default to ChartHop’s if any changes are made, therefore changing an open role must be done in ChartHop to be accurately reflected in Greenhouse.

However there is an exception for Hiring Manager and Recruiter fields where the integration will not override those fields if they are left empty in ChartHop. This is to accommodate Greenhouse’s ability to have multiple hiring managers and recruiters.

Charthop Jobs only change the status of Greenhouse Openings directly. That being said, if all Openings underneath a Greenhouse Job are deleted or closed, the Greenhouse Job will automatically turn to Closed.

When conducting your headcount planning in ChartHop, you can add new hires and new direct reports as you normally would, but with the added functionality of the outbound data flow which triggers the moment you set a specific new role(s) Recruiting status to Active. 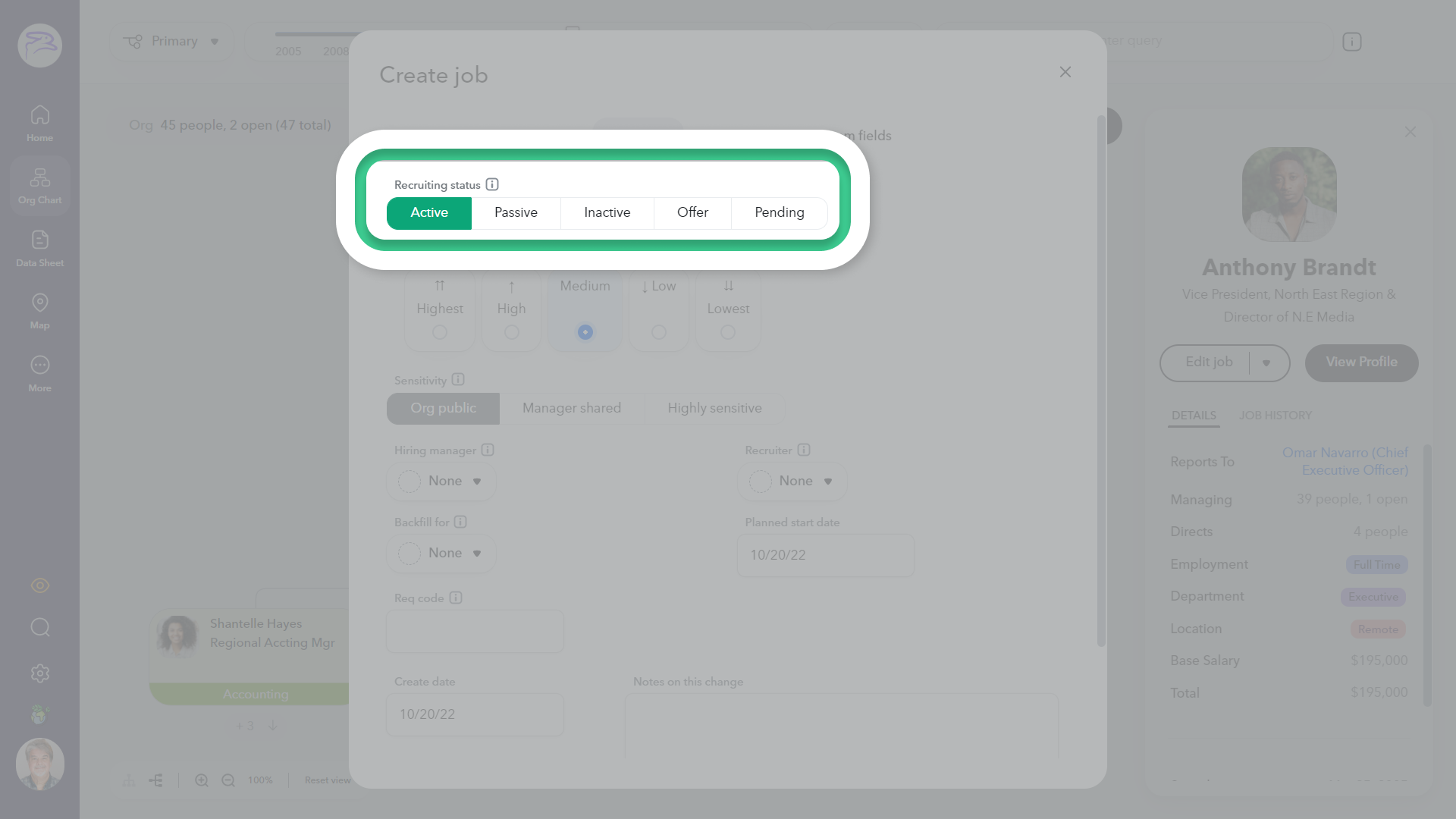 Setting a job as Active triggers the oubound data flow.

To create a new job in ChartHop under an outbound job data flow, follow these steps:

The outbound job data flow kicks in the moment you set the Recruiting status for your newly created role is set to Active.

When a new job is created in ChartHop, it copies the job posting from the matching job template configured in the Greenhouse integration job template settings. Learn more.

If Match Jobs By Job Code is disabled, no job codes exist, or if no match is found via job codes, the initial mappings are then determined by your Group Job Openings settings (for example Title, Title and Location, or None).

ChartHop stores both the job id and opening id in the Greenhouse Job ID (greenhouseId) field, separated by a slash. 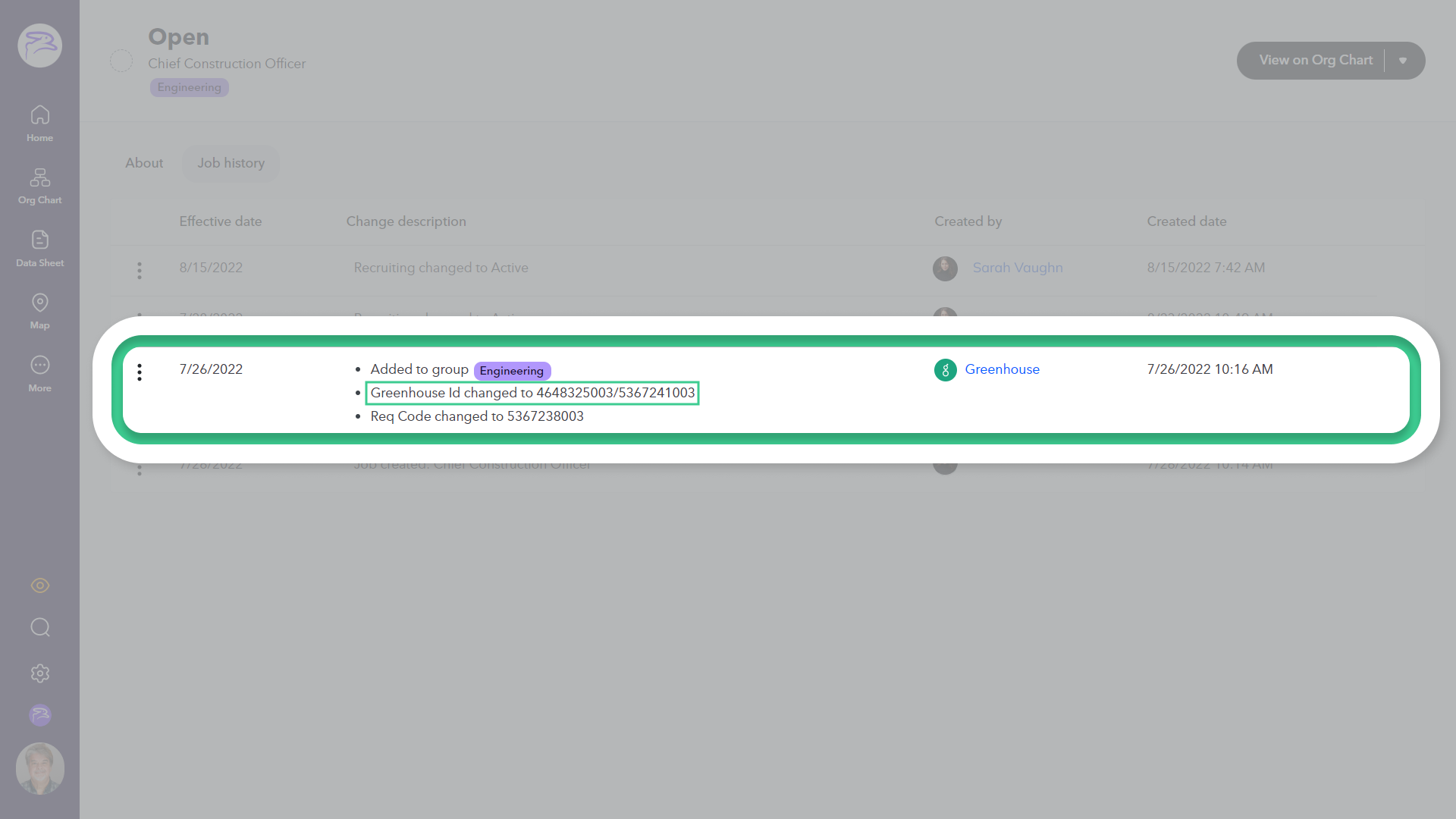 Job matching when merging roles to primary in a scenario

When managing an outbound data flow in a ChartHop scenario, you should be aware of the logic used in order to match the jobs.

Once you create a new job in ChartHop or update the job to Active through the Org chart, or using a merged scenario, the new job information migrates to Greenhouse.

As a recruiter, after an initial sync, you can navigate to Greenhouse and update all of the pertinent information pertaining to a role that is not updated in ChartHop, such as the job’s description. With this done, you can begin actively recruiting for the open role.

During a sync, you may run into inconsistencies with your data due to sync failures or changes in the custom field mappings. To handle these cases, you can enable the Greenhouse integration app's Reconciliation feature.

Reconciliations are only available for outbound job data flows. 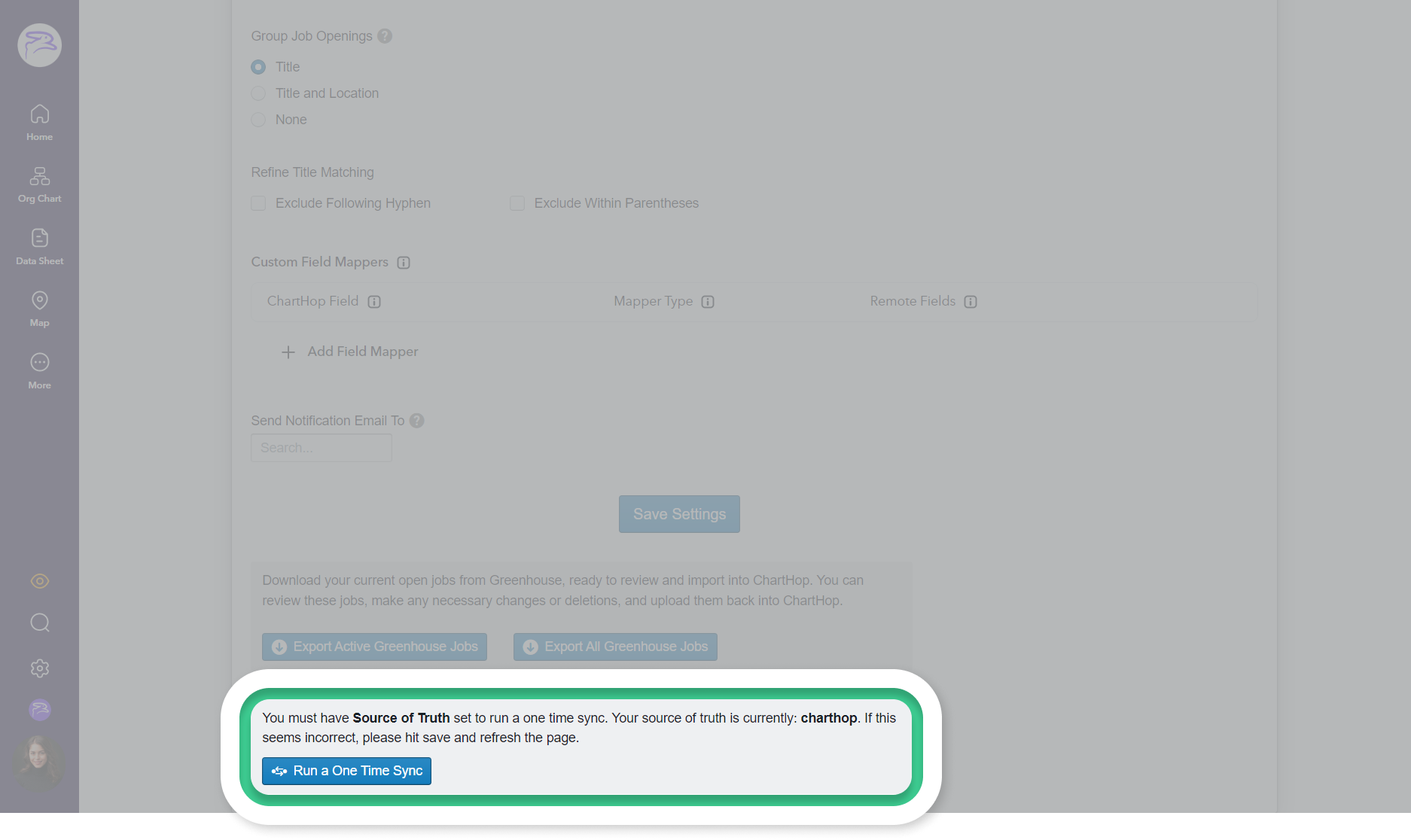 Select the Run a One Time Sync button to manually trigger a reconcilliation.

Updated 24 Nov 2022
Did this page help you?
Yes
No
UP NEXT
Lever as the source of truth
Docs powered by archbee